Dishes priced around: A$25 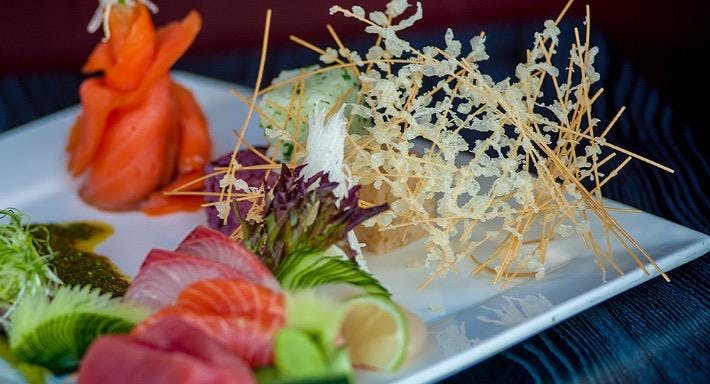 Link your Qantas Frequent Flyer account to double your Qantas Points when creating a new Quandoo account, downloading the app, or for making an eligible reservation.*

OSushi Byron Bay is an iconic fixture in town, for very good reason. Situated a mere 10-minute walk down Jonson Street from Main Beach, OSushi is a contemporary Japanese restaurant which is the flagship of the award-winning chain. Dining at OSushi is a treat to all the senses. On top of delivering the freshest catch prepared with the highest attention to detail, the centralised open kitchen also gives you a peek at its chefs behind the scenes while you peruse the delicacies that pass by on the sushi train. The O sushi steak, a chef’s selection featuring 220 grams of premium organic tenderloin steak, is not to be missed. Hurry up and book a spot to get in on the action at OSushi Byron Bay.

Can I pay with a credit card at OSushi - Byron Bay restaurant?

Yes, you can pay with Visa, MasterCard, Debit / Maestro Card.

Does the restaurant OSushi - Byron Bay has Outdoor seating?

No, the restaurant OSushi - Byron Bay has no Outdoor seating.

It’s safe to say that if you’re a Byron Bay local, you know about OSushi. One of the most popular choices for a post-surf meal or for a special evening indulging in the town’s best Japanese, Osushi Byron Bay is an absolute treat in all regards. In true Northern Rivers style, all the ingredients and produce used are organic, free-range and local, with plenty of vegan and vegetarian options alongside the fresh seafood and meat – the soy sauce is even gluten-free! Not only serving a whole host of sushi from the train, you’ll also find Japanese tapas, teriyaki, teppan, noodle and soup dishes and plenty more besides. It’s all too good, really.

Let’s take a look into the OSushi restaurant Byron Bay menu, shall we? If you’re in for lunch, there’s nothing quite like relaxing after a swim and indulging in the chef’s nigiri platter brimming with raw tuna, fresh and seared salmon, kingfish and prawns or tucking into the ever changing selection of sushi rolls. Then, if you’re in later we love ordering the spicy edamame coated in garlic and chilli, halloumi tempura, nasu dengaku crispy eggplant and the chargrilled kingfish marinated with red miso and yuzu served with veggies and edamame puree. OSushi Japanese Byron Bay on Jonson Street is truly exceptional dining and is located in the Woolworths complex at the back end near Woody’s Surf Shack. Book now!