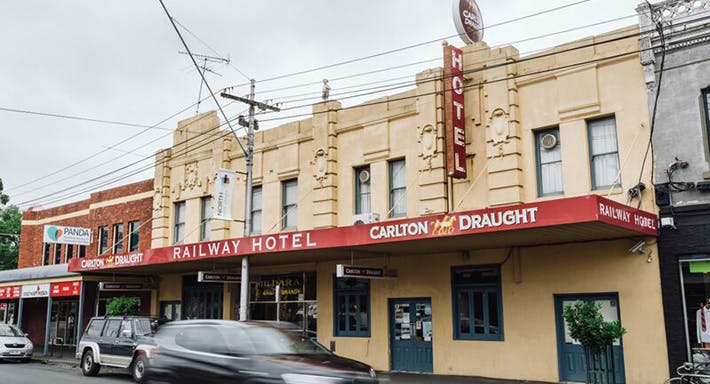 Ah, the pleasures of an unpretentious local pub that has your usual battlements of draught beer taps lining the long and polished bar but also does a decent meal at good prices. Here at Fitzroy North’s Railway Hotel, simply The Railway to its retinue of local loyalists, we’ve found that not only does it house a secret and altogether charming beer garden out back, but that central to its appeal is an Italian kitchen that turns out the cuisine of the bel paese just like nonna would. This gem of a Melbourne boozer (and down-home Italian restaurant) up on Nicholson Street also boasts an enviable line up of local live music.

Melbourne’s Railway Hotel divvies up its generous interior into railway-themed barroom, bistro, and a more formal dining area, curtained off by a fishtank. The opposite of fussy, take your pick from the huge, wall-length blackboard menu and grab yourself a seat anywhere. For every ounce of surprise you express when you encounter the range and quality of the predominantly Italian cuisine on offer at this Fitzroy North local, you’ll find two ounces given back to you in the form of knowing smiles – locals have been flocking to The Railway for years for dishes like polenta and continental sausages, penne Siciliana, veal parmigiana, and salads made from greens gleaned from the neighbours gardens!

This fact exemplifies the role Railway Hotel plays in the community. It is truly a communal space, with regulars gathering in the dining room where the famous menu hangs and, when the weekend rolls around, spilling out into the pool room and the parlour. Lest we forget the beer garden. Out here, shade is provided by well-established vines winding around pergolas – the perfect hidden spot in Fitzroy North for a beer on summery days. Gigs abound, with The Railway playing host to Melbourne bands like the Brunswick Blues Shooters, The Flying Engine, Carino Son Cuban Music, and the Hornets. It’s thanks to proprietors Peter and Miriam that The Railway is such a staunch supporter of diverse musical talent, and that there’s such good food on offer. Find The Railway – not on a corner – down Nicholson Street, on the block between Park and Liverpool.