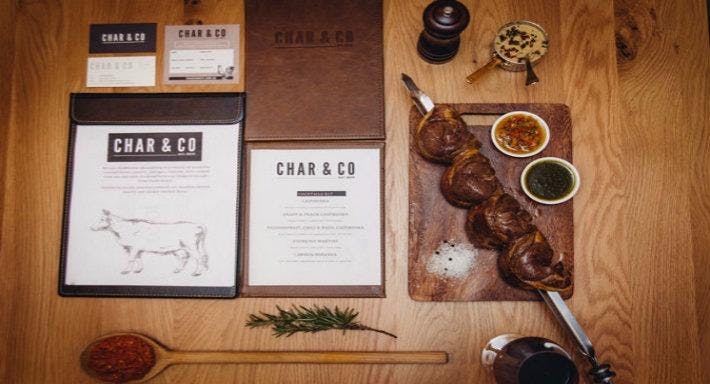 Bringing the vibrant Gaucho culture to Double Bay, Char & Co on Knox Street has a created a menu that perfectly blends Latin American and European cuisines in an overtly warm and enticing dining space. Specialising in wood fire roasted meats and seafood, this elegant restaurant is home to a specially designed barbecue that cooks the sustainably-sourced meat to absolute perfection. This is a restaurant for people with a love of exceptional food, cocktails and atmosphere, and is fast becoming one of Sydney’s best dining spots. As you’d expect, reservations are essential to avoid disappointment.

The menu at Char & Co is where this chic and stylish Double Bay restaurant really shines. Offering a range of selections from churrasco through to grilled meats and burgers, the flavours are truly out of this world – in true Latin American style of course. If you’re after churrasco, Char & Co’s variety of roasted meats are spit-roasted over natural charcoal and iron bark wood creating an intense aroma and fragrance. The idea is, Char & Co’s servers float around the space with the meat on large skewers and slice directly onto your plate as you require. So essentially, it’s non-stop meat for as long as you like. Salivating yet?

If you’re visiting this Sydney haven for something from the grill, you’ll find every possible cut you could think of, from scotch fillet, to lamb rump, to chicken, Yamba prawns, chorizo and pork belly with your choice of sauce. If you’ve a hankering for a fully loaded burger, keep an eye out for the carne, brimming with wagyu beef, house-smoked bacon, bourbon barbecue sauce and melted cheese, while vegetarians can tuck into the pumpkin risotto with sage and lemon burnt butter. Let’s just say that there’s no way you’ll be leaving hungry after a meal at Char & Co. Located in the heart of Double Bay on Knox Street, this is one of Sydney’s best Latin American restaurants so do yourself a favour and reserve a table as soon as you can – you won’t be disappointed.