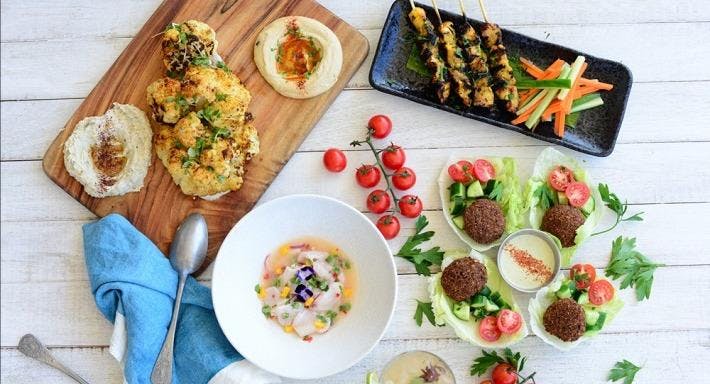 Shuk’s distinctive corner cafe at the intersection of North Bondi’s Mitchell Street and Murriverie Road has become a neighbourhood institution thanks to its exciting range of Mediterranean and Israeli-inspired food. The passion project of three Israeli foodies, the kinds of cuisine available here reflect the melting-pot nature of that part of the world – whether you stop in for breakfast, lunch, or dinner, you’re going to encounter the flavours and culinary styles of the Arabic world and the Middle East, Turkey, the Levant, and those of further-flung Mediterranean nations. With an on-site bakery turning out doughy delights daily and carefully chosen ingredients making their way to plate, as well as a fully-licensed bar meaning no BYO, Shuk’s a fresh new face on Sydney’s cafe and dining scene that’s set to stay.

Dawn to dusk, seven days a week, Shuk is attracting a growing crowd of locals and foodies from further afield seeking out new culinary thrills in the city. At first glance, Shuk’s premises on the corner of Mitchell Street and Murriverie Road speak classic corner cafe, with a bright and airy interior, streetside seating, a steaming espresso machine, and a deli counter displaying a selection of the day’s wares. But what’s creating a buzz among Sydney’s culinary connoisseurs is Shuk’s unique food offering: a blend of Mediterranean and Israeli cuisines plus a pretty incredible on-site bakery, whose wares are displayed proudly in wooden boxes stacked up high on the walls. The delicious catch is that when one speaks of Israeli cuisine, one is implicating the cuisines brought to the region from 130 other countries over the past 50 years. This is one North Bondi melting pot you don’t want to miss.

For breakfast, we heartily recommend Shuk’s almost-namesake shakshuka, a Middle Eastern specialty that’s already well-known among Sydney’s more adventurous, but elevated here to new heights. For those with a sweeter tooth, why not opt for the beghrir, Moroccan cinnamon and almond meal pancakes topped with a honey-lemon glaze and halvah. Shuk by night (its Mitchell Street premises are open later, until 10pm, on Friday and Saturday) transforms from an all-day casual cafe to a more refined but just as relaxed bistro, offering Middle Eastern dishes like traditional mezze platters and curious entrees like their snapper and mango ceviche. Mains are just as eclectic: house-made gnocchi, Mediterranean marinated roast chicken with labne and slaw, braised lamb shoulder with couscous, and the signature Shuk bouillabaisse with blue eye, calamari, mussels, vongole and prawns in a tomato bisque. Becoming increasingly popular for those looking for a North Bondi booking, Shuk is also a capable host for private functions, creating bespoke Mediterranean-Israeli canape receptions and multi-course menus for all sorts of celebrations.